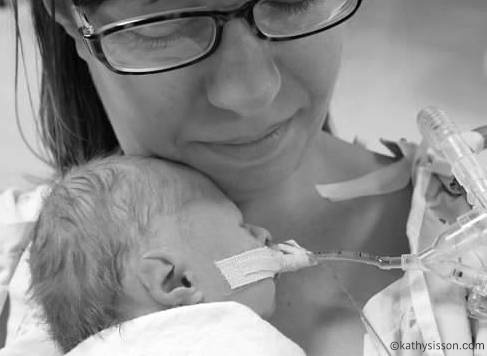 I’m lucky, though. I eventually left the hospital with a baby in my arms. Even luckier still, three years later I had a second, perfectly average, birth story to compare to my first weeks of motherhood spent in that lonely chair. I realized even though it’s hard to see it when you’re in it, there are actually a few positives that can come from having a baby in the NICU.

You have a village of experts at your disposal.

Rather than being ushered out of the hospital two days post-partum, you hang around a while. Learning, not only about heart rates and oxygen levels but also becoming comfortable with newborn care basics like changing diapers and bathing babies. NICU nurses are simply amazing.

You get more sleep.

Save for the worry, you are not cluster feeding, reacting to every grunt and squirm, or constantly checking to make sure they’re breathing (you’ll do all that later, of course, but right now, the NICU monitors have it covered). You can sleep in your own bed as you rest and heal.

You are amazed by modern medicine.

You’re beyond grateful you were born in this century. A time when your baby has a chance to thrive and when birthing complications that could have taken you both a hundred years ago is now a routine procedure.

You are amazed by your baby.

You wish you could trade places with them, but are in awe at what they can endure. With each strength they gain, you gain a little too.

Milestones are put in perspective.

The good in your friends and family shines.

You begin to feel thankful. After two days in the NICU, I sent out a “can you be here tomorrow?” mayday to my mom, who lived across the country. She hopped on a plane the very next day. Friends brought us meals and groceries. The day my husband and I left the hospital while our baby stayed, a friend made us vegetable soup for dinner. It was fall, the weather was just becoming cooler, and that soup was a warm salve to our souls.

The good in your partner shines.

You are navigating this unknown together. You will both cry and celebrate those small victories. Your partner can help pull you out of the darkness if you let them.

Your mama bear comes out early. As you learn more each day and form a plan with your baby’s doctors and nurses, you become your baby’s strongest advocate.

You have a new community.

The I’ve been there’s from other NICU alums can be a lifeline as you try to process your feelings. For every when is she coming home? I couldn’t answer from someone who didn’t get it, there was another, I know this is so hard right now from someone who did. You will be that person for a future NICU parent now.

You have a new cause.

Whether you feel more connected to the important research conducted by the March of Dimes or to smaller charities founded by NICU loss mamas like Carrie Meghie of the Jackson Chance Foundation or Stacey Skrysak of the Triple Heart Foundation, you are now deeply invested in the wellbeing of preemie babies (and their families).

So, mama, if you are in the never-ending days of the NICU, I know this is so hard. I hope you can celebrate those milestones that are inching your baby closer to home. And if you love a NICU mama right now, give her a hug and make her some soup already. Hopefully, she’ll be calling you for advice on breastfeeding and sleep deprivation in no time.