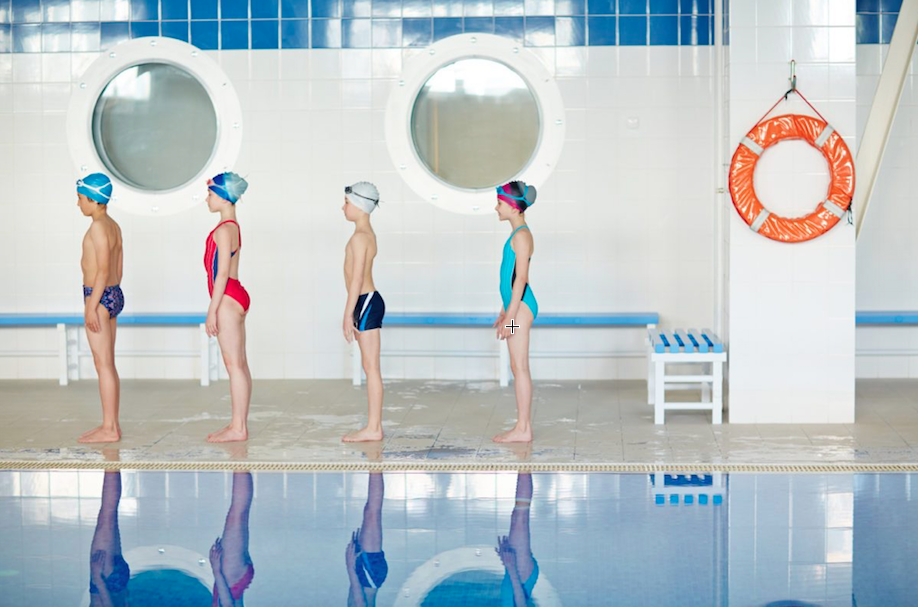 When my parents downsized their house, my mom seemed overjoyed that she could finally unload the boxes of memorabilia she’d amassed throughout my childhood. My husband received a similar delivery from his mom when we got married. Both were unsentimental send-offs of stuff to the rightful owners.

We moved these unopened boxes from apartment to apartment to finally our first home. They sat stored in the basement for months until one night we decided to dig in and purge. In his, we found a stack of juicy notes from two high school girlfriends, a truck collection, and loads of football and hockey paraphernalia. In mine we found art projects, scrapbooks, my troll collection, and, at the very bottom, a lone trophy. As I carefully unwrapped the newspaper surrounding that golden girl set atop a metallic blue pillar, it brought me back to the summer of 1992.

The air was frigid, even though it was mid-July. The gray sky loomed ominously as I snapped a swim cap over my head and shoved my ponytail into the tight rubber rim. I looked around. Only two other swimmers had shown up, so I had a lane to myself. I stretched my goggles over my eyes, dipped under the water, and propelled myself off the wall into my warm-up. I was 11 years old and I had my eyes on a big goal.

The previous year had set the stage. During the summer’s end-of-season swim banquet, I’d seen many teammates get awards for relay records and fastest times. I watched with envy and awe as the winners claimed their well-earned spoils.

I, on the other hand, came from a lineage of mediocre athletes. I was used to being picked nearly last in every gym class and learned early that tryouts didn’t go well for me. It actually helped narrow my focus for sports. With swimming, showing up meant I was on the team. Plus I wasn’t going to strike out, miss the basket, or whiff the set-and-spike. The only person I could really let down was myself.

Towards the end of that swim banquet, a few mid-sized trophies still sat unclaimed at the head coaches’ table. Who are those for? I wondered. Soon the coach read off a small handful of names and a few select teammates went up to the podium to collect their own gleaming golden statues…for perfect attendance.

Perfect attendance? Never had a trophy been more within my reach! It wasn’t going to take skill, it was going to take determination! I visualized earning that trophy throughout the school year and, as the next summer swim season began, I knew what I had to do.

On that gray July morning in 1992, my mom said the temperature was too cold and the weather called for thunder, but I wouldn’t budge. She was driving me to that swim practice.

Now that I have young kids, I wonder what activities they’ll chose to pursue and when we’ll begin to lose our weeknights and weekends to practices, games, or (God forbid) travel tournaments.

In today’s time of “trophies for everyone,” I also wonder if I’ll get to see them shine with pride over a medal or a mathlete award they’ll have worked hard to achieve. I hope so.

Maybe you’d argue my perfect attendance was essentially a prize for participation or that I was setting pretty low expectations for myself. Maybe. I swam my unathletic little heart out and was never close to coming in first place, but being recognized for a different kind of accomplishment, one that only a few had achieved, still meant something.

As my husband and I finished sorting through our childhood boxes, I set my perfect attendance trophy in the “keeps” section. I’d earned it.